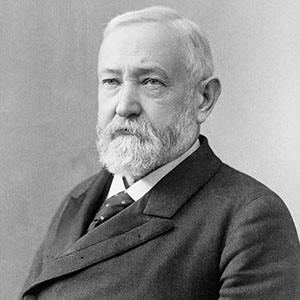 Benjamin Harrison, grandson of former president William Henry Harrison, served as the 23rd President of the United States from 1889-93. As president, Harrison actively sought to expand America’s role in foreign affairs. However, he was heavily criticized for decisions that contributed to a major economic recession.

Benjamin Harrison was born in 1833 in North Bend, Ohio. An academic at heart, Harrison’s academic accomplishments include graduating near the top of his class from Miami University and studying law in Cincinnati. Shortly after beginning his career as an attorney, Harrison became actively involved with the new Republican Party in addition to fighting in the Civil War.

Upon returning from his service in the war, Harrison served as a member of the United States Senate from 1881-87. As a Senator, Harrison was best known for being an active civil rights advocate. Specifically, he was notorious for opposing the Chinese Exclusion Act of 1882 because he believed it violated Chinese immigrants’ civil rights. He was also known for arguing on behalf of Civil War Veterans, as he attempted to establish pension benefits for veterans. Harrison’s tenure as a Senator came to an end in 1888, which prompted him to run for president in the 1888 election.

During his 1888 presidential election against the nation’s 22nd president, Grover Cleveland, Benjamin Harrison became the first presidential candidate to utilize the front-porch campaigning tactic. By utilizing this tactic, Harrison delivered his campaign speeches solely to delegations visiting Indianapolis. This tactic proved to be successful, as Harrison defeated Cleveland to become the nation’s 23rd president. This victory, however, was not without controversy as Harrison lost the general election by 90,000 votes. Victories in New York and Indiana proved to be crucial for Harrison, as they helped him win over 60 more electoral college votes than Cleveland, pushing him to victory.

As president, Harrison’s domestic policies prompted criticism. Much of this criticism stemmed from his support of the McKinley Tariff of 1890, which set exorbitant tariffs on imports in an effort to protect American corporations from foreign competitors. The act, which increased the cost of goods, was not well-received by Americans. Moreover, the passage of the Sherman Silver Purchase Act of 1890 prompted criticism as it eventually depleted the United States treasury of gold. Collectively, these actions prompted additional criticisms that Harrison helped contribute to one of the nation’s great economic recessions. During his presidency, however, Harrison was one of the most active presidents with regards to foreign policy. His accomplishments include successfully negotiating numerous trade agreements with foreign nations and protecting the nation during disputes with Chile, Britain, and Canada.