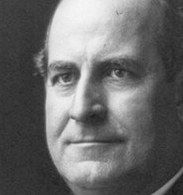 William Jennings Bryan, known as the “Great Commoner,” was one of the great orators of his era. Despite being a force in the Progressive Movement, he is largely remembered for his staunch opposition to evolution and prominent role in the “Scopes Money Trial” of 1925.

Bryan, a native of Nebraska, served in the House of Representatives from 1891-1895. Bryan was the Democrat’s nominee for president three times, but never reached the country’s highest office. He was, however, deeply respected for his strong advocacy of popular democracy and criticism of increasingly powerful business trusts. In support of striking coal miners, he stated: “Whether a man is a laboring man, a farmer or a merchant, he must see that the opportunities are constantly narrowing under this trust system.”

Bryan also famously advocated in support of the coinage of free silver, citing that ending the gold standard would put more money in the hands of everyday Americans. “You shall not press down upon the brow of labor a crown of thorns. You shall not crucify mankind upon a cross of gold,” he stated.

After losing re-election in the House, Bryan became a professional speech maker. After helping Woodrow Wilson secure the presidency, Bryan served as Secretary of State in his Administration from 1913-1915. He resigned from the position in a display of pacifism to focus his efforts exclusively on keeping the United States out of World War I.

While Bryan was a leader of the Progressive Movement, he was also very religious. In 1925, Bryan was the lead prosecutor in the trial John T. Scopes, a Tennessee teacher charged with teaching Darwin’s theory of evolution in violation of state law. When defense attorney Clarence Darrow unexpectedly called Bryan to the stand, Bryan vehemently and unsuccessfully sought to make the case for a literal interpretation of the bible. While Scopes was convicted, Bryan was mocked for his fundamentalist views. He died five days after the trial concluded.