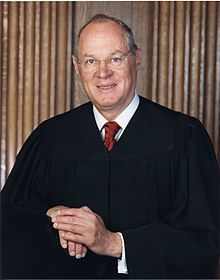 Anthony Kennedy is currently serving as an Associate Justice on the U.S Supreme Court, having been appointed in 1988 by President Ronald Reagan. As the second longest-serving current justice, following Antonin Scalia, he is known to be the swing vote on many court decisions.

Anthony Kennedy was born on July 23, 1936 in Sacramento, California. Although often mistakenly associated with the prominent Kennedy political family, he has no relation to assassinated President John F. Kennedy or his family. However, Anthony Kennedy did grow up in politics and even served as a page in the California State Senate during his younger years. He matriculated at Stanford University, the London School of Economics and Harvard Law, where he earned his law degree in 1961.

Kennedy ran his own practice until the death of his father, a prominent attorney himself, in 1963. In that year, he took over his father’s practice, which he ran until 1975. He also served as a constitutional law professor at California’s McGeorge School of Law until 1988, during which time he helped then-governor Ronald Reagan draft a tax proposal. President Gerald Ford nominated Kennedy to serve on the United States Court of Appeals for the Ninth Circuit in 1975, where his appointment was unanimously confirmed by the Senate.

In 1987, President Ronald Reagan nominated Kennedy to replace Lewis F. Powell Jr. on the U.S. Supreme Court and he was confirmed to the position in 1988. Kennedy is known for examining cases individually, rather than on a politically ideological basis. For this reason, he has often been the deciding vote in close rulings. He tends to take very broad views on Americans’ individual and constitutional rights, and typically votes in a way that places restrictions on certain issues – such as free speech and abortion – but does not altogether prohibit them. His rulings have also favored expanded rights regarding sexual orientation. However, and similar to Antonin Scalia, he is known for being tough on crime and makes few restrictions on police officers when it comes to apprehending suspects and gathering evidence.

Outside the courtroom, Kennedy spends many summers in Salzburg, Austria, at the University of Salzburg teaching international and American law.