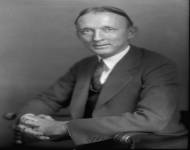 Hugo Lafayette Black was born in Harlan, Alabama on February 27, 1886. Black grew up the youngest child in a large family. His father was a businessman. Although he never graduated from high school, Black went on to study at the University of Alabama School of Law at the Tuscaloosa campus. He originally studied medicine at the Alabama medical school, but later decided to study law.

After graduating in 1906, Black worked as a lawyer in Ashland, Alabama where he specialized in labor and personal injury cases. He then moved on to become a police court magistrate in Birmingham. In 1914, he was elected prosecutor of Jefferson County. After serving as prosecutor for four years, Black enlisted in the Army during World War I. He went on to achieve the rank of captain during his service.

During the early 1920s, Black became a member of the Ku Klux Klan (“KKK”), a racial/religious based terrorist group predominantly located in the South. At the time Black joined, the KKK was a big part of the Birmingham labor movements. Black resigned two years after joining before he entered the elections for U.S. Senator. When discussing his involvement with the KKK in later years, Black said his only motivation for joining the group was to further his political career.

In 1926, Black won a seat on the U.S. Senate, where he became a supporter of President Roosevelt’s New Deal. In 1935, he was named as the chairman of the Senate Committee on Education and Labor.

Black was the first of nine justices to be nominated by President Roosevelt to the Supreme Court. After his history of being involved in the KKK was revealed, many people called for the Senate to deny Black a seat on the Court. But, this petition failed and in 1937 Black was sworn in as a justice.

In Chambers v. Florida, Justice Black wrote the majority opinion, finding that due process had been violated when four black men in Florida were convicted of murder. The convictions were based off of testimony from the four men which came after they were “continually threatened and physically mistreated until they finally, in hopeless desperation and fear of their lives, agreed to confess.” Chambers v. Florida, 309 U.S. 227, 231 (1940). The majority overturned their convictions for violation of the Fourteenth Amendment.

In Korematsu v. United States, a case discussing the constitutionality of placing Japanese Americans in internment camps during World War II, Black wrote the majority opinion, which found that the internment was constitutional. The majority felt that the need to protect the country outweighed the rights of Japanese Americans. Korematsu v. United States, 323 U.S. 214 (1944).

Black also wrote the majority opinion in the decision of Everson v. Board of Education. In that case, a taxpayer brought suit claiming that indirect aid to parents of children in private religious schools by taxpayer money violated the First Amendment. The majority, in a 5-4 decision, decided that the aid was permissible because the indirect aid was provided to all students regardless of whether or not they attended religious schools. Also, since the payments were not made to a religious institution but rather given to the parents of students, the First Amendment’s separation of church and state was not violated. Everson v. Bd. of Educ., 330 U.S. 1 (1947).

Black died in Maryland on September 25, 1971 after suffering a stroke. He was 85. He is buried at Arlington National Cemetery.