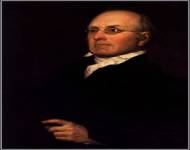 Joseph Story was born on September 18, 1779, in Marblehead, Massachusetts. His father Elisha Story was a member of the Sons of Liberty who took part in the Boston Tea Party in 1773. Story graduated second in his class from Harvard University in 1798 and was a member of the Phi Beta Kappa Society. Following graduation, he studied law under Congressman and future Chief Justice of Massachusetts Samuel Sewall.

After being admitted to the Bar in 1801 and working in a highly successful private practice for several years, Story began his political career. As a member of the Democratic-Republican Party, Story was elected to the Massachusetts House of Representatives in 1805, where he served for three years. Story was then elected to the U.S. Congress in 1808 and went on to become Speaker in 1811.

In November 1811, President Madison nominated Story as Justice on the United States Supreme Court to fill the vacant seat of Justice William Cushing. At the age of thirty-two, Story became the youngest Justice of the U.S. Supreme Court, officially taking his post on November 18, 1811.

Justice Story was heavily involved with nearly all court proceedings during his tenure on the Supreme Court. Although he generally aligned himself with the Federalist views of Chief Justice John Marshall, who served as the overall leader of the court, Story made a tremendous contribution to a large proportion of the decisions made.

Story wrote his first major opinion in the 1816 Martin v. Hunter’s Lessee case. With the unanimous decision of the Court, Story maintained that the Supreme Court has appellate authority over state courts on all matters regarding federal law. This decision now serves as a fundamental principle in the function of the Supreme Court.

During his later years on the Supreme Court, Story wrote two of the court’s most important decisions regarding slavery, United States v. The Amistad (1841) and Prigg v. Pennsylvania (1842). As an opponent of slavery, Story continually upheld his view that international slave trade should be forbidden, while domestic slavery should remain legal because of its protection in the Constitution. His decisions on both of these court cases reflect this opinion.

In United States v. The Amistad (1841), now regarded as a landmark case regarding slavery, a rebellion of Africans had occurred on a Spanish ship sailing in the Atlantic. Story maintained that because the Africans on board were illegally captured and imprisoned, they were in fact free men who had the right to return safely to Africa. In Prigg v. Pennsylvania (1842), Story upheld the Fugitive Slave Act of 1793, declaring that states could not prevent the recapture of slaves from other parts of the country.

In Swift v. Tyson (1842), Story authored the opinion that civil litigation in federal court would use general common law instead of state law. This expanded federal court jurisdiction.

Justice Story became one of the most prominent and successful authors of the early nineteenth century. His three-volume work published in 1833 titled Commentaries on the Constitution of the United States is considered a staple in American legal studies to this day.

In 1829 Story became the Dane Professor of Law at Harvard University, where he was instrumental in the founding of the law school. This position allowed for the endowment to pay for the publication of numerous other commentaries including The Conflict of Laws (1834), Equity Pleadings (1838) and Bills of Exchange (1843), among others.

Story served as a Supreme Court Justice until his death on September 10, 1845 at age 65. At the time of his death, many considered Story to be the greatest Jurist in the United States.