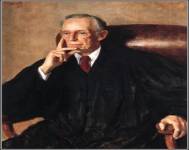 Lewis F. Powell was born on September 19, 1907 in Suffolk, Virginia. Powell stayed in his native Virginia for college, earning both his undergraduate and law degrees from Washington & Lee University in 1929 and 1931, respectively. Powell received his LLM from Harvard Law School in 1932.

In the years following graduation, Powell worked in Richmond, Virginia as an attorney for Hunton, Williams, Gay and Moore. He became partner at the firm in the late 1930s. In 1936, Powell married his wife Josephine. They went on to have three daughters and a son together.

During World War II, Powell served in the United States Air Force, where he eventually advanced to the rank of colonel. For a portion of his tenure in the army he worked to decipher German military communications. Powell’s service earned him the Legion of Merit and a Bronze Star Medal.

Powell returned to Richmond following the war and continued his legal practice. During this time he also served as Chairman of the Richmond School Board, where he became a known proponent of integration in the school district. Powell later served on the Virginia Board of Education, where he worked as Chairman from 1968-1969.

Powell declined President Nixon’s first proposal to join the Supreme Court in 1969; however, two years later in 1971 Nixon asked for a second time and Powell accepted. He filled the seat that was vacated by Justice Hugo L. Black.

Lewis Powell served on the United States Supreme Court from January 7, 1972 until June 26, 1987, when he retired. During his tenure on the Supreme Court, Powell was not easily labeled as conservative or liberal, and he often acted as the swing vote in important cases.

Among his more liberal stances, Powell voted in favor of legalizing abortion in the United States in Roe v. Wade (1973), which he supported numerous times over the next fifteen years. He also led the middle ground in the case of Regents of the University of California v. Bakke (1978), in which he supported affirmative action as a means to achieve diversity.

Powell primarily voted conservatively on matters of crime and law enforcement. He was the swing vote in Bowers v. Hardwick (1986) that upheld Georgia’s prohibition against sodomy. He also voted to uphold the death penalty in McCleskey v. Kemp (1987), despite a disturbing study that found racial inequality in those executed.

Lewis Powell retired in 1987 at the age of 80 due to deteriorating health. Justice Powell died on August 25, 1998, less than a month before his 91st birthday.

Regents of the University of California v. Bakke