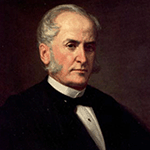 Ward Hunt was born and raised in Utica, New York. He received his undergraduate degree from Union College in 1828, where he was an early member of the Kappa Alpha Society. Following graduation, Hunt studied law under Judge James Gould at Litchfield Law School in Litchfield, Connecticut. He was admitted to the bar in 1831.

Hunt, a Jacksonian Democrat, was extremely active in politics. He briefly served in the New York State Assembly before transitioning to Mayor of Utica in 1844. Unhappy with his party’s position on slavery, Hunt joined the Free Soil ticket, supporting presidential candidate Martin Van Buren in 1848. Eventually, Hunt assisted in founding the Republican Party in New York.

Hunt remained in private practice until being elected to New York’s highest court, the Court of Appeals, in 1865. After the sudden death of Chief Judge William B. Wright in 1868, Hunt was named the court’s Chief Judge.

Hunt was appointed to the Supreme Court by President Ulysses S. Grant in 1872. Hunt, however, had little impact during his ten-year tenure. He sided with the majority in all but twenty-two cases, and penned only four dissenting opinions. In 1878, Hunt suffered a stroke, leaving him paralyzed. The severity of the stroke prevented him from attending court sessions or rendering opinions, yet Hunt remained on the Court for three more years until his retirement on January 27, 1882.

Hunt passed away in Washington, D.C. on March 24, 1886. He is buried in the Forest Hill Cemetery in Utica, New York.