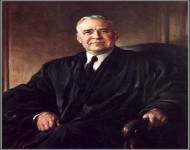 Wiley B. Rutledge, Jr., was born on July 20, 1894 in Cloverport, Kentucky to a Baptist Preacher. After growing up in Tennessee, Rutledge attended Maryville College before graduating from the University of Wisconsin in 1914. Rutledge attended Indiana University School of Law. As a part-time student, Rutledge spent his days teaching at a local high school in order to pay for law school. Before graduating, Rutledge moved to Colorado, where he finished law school and received his degree from the University of Colorado.

After graduating law school, Rutledge entered private practice in Colorado. Rutledge remained in private practice for two years before pursuing a career as a law professor. He taught at the University of Colorado School of Law before taking the same job at Washington University in St. Louis. Rutledge served as dean of Washington University from 1931 to 1935. While in St. Louis, Rutledge served on the Social Justice Commission where he tried reforming the Missouri criminal code, allowing women to become jury members, and creating a voluntary defender plan.

Rutledge was a strong supporter of First Amendment rights. Rutledge sided with the majority in West Virginia School Board v. Barnette, 319 U.S. 624 (1943), finding the requirement that public school students to salute the flag unconstitutional because students should be able to abstain in accordance with their religious beliefs. The decision overruled the prior Supreme Court decision in Minersville School District v. Gobitis. Additionally, in Thomas v. Collins, 323 U.S. 516 (1945), Rutledge struck down a Texas law requiring union officials to obtain an organizer’s card because it interfered with a person’s right to free speech and assembly.

In the shadow of World War II, Rutledge had the opportunity to rule on many controversial cases. In Hirabyashi v. United States, 320 U.S. 81 (1943), Rutledge joined the unanimous court allowing a curfew on persons of Japanese ancestry because it did not violate the Fifth Amendment since it was during a time of war. Similarly, in Korematsu v. United States, 323 U.S. 214 (1994), Rutledge joined the majority holding the exclusion and restriction of Japanese-Americans was constitutional because the need to protect against espionage was greater than any individual’s rights.

However, Rutledge did not always side with the United States. Rutledge wrote one of his most famous and controversial opinions in dissent of In re Yamashita, 327 U.S. 1 (1946). He condemned the Japanese commander’s execution because he was convicted on hearsay evidence and Rutledge believed that even defeated enemies deserved a fair trial.

Rutledge was also a proponent of equal protection. Dissenting in Goesaert v. Cleary, 335 U.S. 464 (1948), Rutledge penned the first modern gender discrimination opinion, where he derided the majority’s decision to uphold a Michigan law that disallowed any women from tending bar unless she was related to the male owner.

Rutledge believed that due process under the Fourteenth Amendment encompassed the entire Bill of Rights. Yet he wanted due process to stretch even further, believing that the due process should not be limited by the Bill of Rights. His dissenting opinion in Adamson v. California, 332 U.S. 46 (1947) illustrates this idea.

At age 55, Rutledge died on September 10, 1949. He suffered a stroke while driving on vacation in Maine.