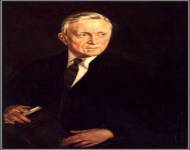 William O. Douglas was born October 16, 1898 in Maine, Minnesota to a Presbyterian minister. After his father died, Douglas moved to Yakima, Washington, where he spent the remainder of his childhood. Douglas contract polio as a child, which lead to his love for the great outdoors because Douglas hiked the surrounding mountains to help strength his polio-weakened legs.

Douglas graduated high school as valedictorian and attended Whitman College in Walla Walla, Washington, on a full academic scholarship. While at Whitman, Douglas stilled needed to help support his family. Douglas worked as a janitor, waited tables, and worked at a jewelers. Despite his busy schedule, Douglas joined a fraternity and participated on the debate team.

In 1920, Douglas graduated from Whitman, returned home, and accepted a job as a high school English teacher. Two years later, Douglas decided to attended law school and was accepted to Columbia University School of Law. In 1925, Douglas graduated second in his class.

Douglas began his legal career at a New York City law firm, which is now Craveth, Swaine & Moore. Unhappy with the intense workload, Douglas left the firm after four months and returned home to Washington. Douglas did not remain home for long and returned to New York City in 1927, where he accepted a teaching position at Columbia University School of Law. The following year, Douglas was hired by Yale Law School. Douglas continued to teach at Yale until 1936.

After working with the Department of Commerce and directing a study on the Securities and Exchange Commission (SEC), Douglas became a member of the SEC. In 1937, Douglas was named chairman of the SEC. During his time as chairman, Douglas reorganized the stock exchange, implemented protections for small investors, and commenced government regulation of securities sales.

Douglas’s time on the Supreme Court is characterized by his fierce defense of civil liberties and his distaste of government power. While Douglas holds the record for most opinions written, critics detract from the achievement because Douglas’ opinions were hastily written and appeared more like a draft than a final opinion.

Douglas penned the unanimous opinion in Skinner v. Oklahoma ex rel. Williamson, 316 U.S. 535 (1942), which struck down Oklahoma’s Criminal Sterilization Act. Under the Act, a person convicted three or more times of felonies could be sterilized by the state. Douglas found the law to be in violation of the Due Process and Equal Protect Clause of the Fourteenth Amendment because procreation was a person’s fundamental right.

In Terminiello v. City of Chicago, 337 U.S. 1 (1949), Douglas wrote the majority striking down Chicago “breach of the peace” ordinance, which criminalized public speech that offended or created dispute. Douglas found the ordinance violated the First Amendment right of free expression. He wrote, “Speech is often provocative and challenging. It may strike at prejudices and preconceptions and have profound unsettling effects as it presses for acceptance of an idea.”

In 1953, Douglas issued a stay of execution for the Julius and Ethel Rosenberg, who were convicted under the Espionage Act for attempting to sell nuclear bomb plans to the Soviet Union. Douglas granted the stay while the court was in recess. Douglas’ decision incited anger and led the U.S. Attorney General, Herbert Brownell, to urge the court to immediately decide the issue. The Court reconvened in a special session and, in a 5-4 vote, vacated the stay of execution in Rosenberg v. United States, 346 U.S. 273 (1953). Subsequently, an attempt to impeach Douglas was made but ended without a vote.

Giswold v. Connecticut, 381 U.S. 479 (1965), proved to be Douglas’ most famous opinion. Authoring the majority, Douglas believed the First, Third, Fourth, and Ninth Amendments combined to protect an individual’s right to privacy in a marital relationship. Therefore, Douglas’ opinion struck down a Connecticut law that criminalized the furnishing of medical treatment to married couples for conception prevention.

In 1970, another Douglas impeachment was attempted; however, this time the charge was led by House Minority Leader, Gerald Ford. Ford charged financial improprieties, which stemmed from Douglas’ position as President of the Board of Directors for the Parvin Foundation. After the hearings by the House Judiciary Committee, the impeachment attempt was abandoned because there was a lack of credible evidence. A public vote was never held.

In 1974, Douglas suffered a devastating stroke while on vacation in the Bahamas. Relegated to a wheelchair, Douglas returned to the court, but the work proved too difficult. Douglas retired on November 12, 1975.

Serving for 36 and a 1/2 years, Douglas retired as the longest serving Supreme Court Justice in United States history. Additionally, he holds the record for most authored opinions.

Besides opinions, Douglas authored more than thirty books while serving as Supreme Court Justice; many of which concerned nature and conservationism. His books include Of Men and Mountain (1950) and A Wilderness Bill of Rights (1965).

Finally succumbing to his deteriorating health, Douglas died on January 19, 1980 in Washington, D.C.