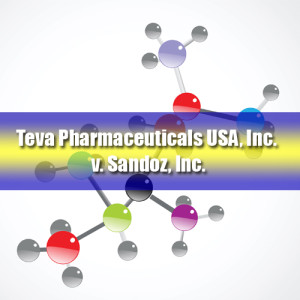 In Teva Pharmaceuticals USA, Inc. v. Sandoz, Inc. 574 U.S. __ (2015), the U.S. Supreme Court addressed the legal standard that the Federal Circuit Court of Appeals must apply when considering the construction of a patent claim. By a vote of 7-2, the Court determined that Federal Rule of Civil Procedure 52(a)(6) requires that the appeals court only overturn a district court’s claim construction if it is “clearly erroneous.”

Teva Pharmaceuticals owns a patent for the multiple sclerosis drug Copaxone. When Sandoz, Inc. sought to market a generic version of the drug, Teva filed a patent infringement suit. Sandoz countered that the patent was invalid, alleging that the claim that Copaxone’s active ingredient had “a molecular weight of 5 to 9 kilodaltons” was fatally indefinite because it failed to state which of three meth­ods of calculation—the weight of the most prevalent molecule, the weight as calculated by the average weight of all molecules, or weight as calculated by an average in which heavier molecules count for more—was used to determine that weight.

By a vote of 7-2, the Court concluded that the appeals court erred in applying a de novo standard of review. In so ruling, the justices changed the standard of review that is applied to claim construction findings. Justice Stephen G. Breyer authored the majority opinion.

“When reviewing a district court’s resolution of subsidiary factual matters made in the course of its construction of a patent claim, the Federal Circuit must apply a ‘clear error,’ not a de novo, standard of review,” the Court ruled. In reaching its decision, the majority highlighted that the “clearly erroneous” standard set forth in Federal Rule of Civil Procedure 52(a)(6) should be applied to all findings of fact, and patent cases are no exception.

Rule 52 requires appellate courts to review such disputes under the “clearly erroneous” standard. Application of this standard is further supported by precedent and by practical considerations. Clear error review is “particularly” important in patent cases because a district court judge who has presided over, and listened to, the entire pro­ceeding has a comparatively greater opportunity to gain the neces­sary “familiarity with specific scientific problems and principles,” Graver Tank & Mfg. Co. v. Linde Air Products Co., 339 U. S. 605, 610, than an appeals court judge who must read a written transcript or perhaps just those portions referenced by the parties.

Justices Samuel Alito and Clarence Thomas dissented. They argued that the Federal Circuit was correct in applying de novo review because claim construction determinations are not akin to findings of fact. Rather, the dissenters maintain that patent claim constructions are more analogous to statutes and should be considered issues of law.