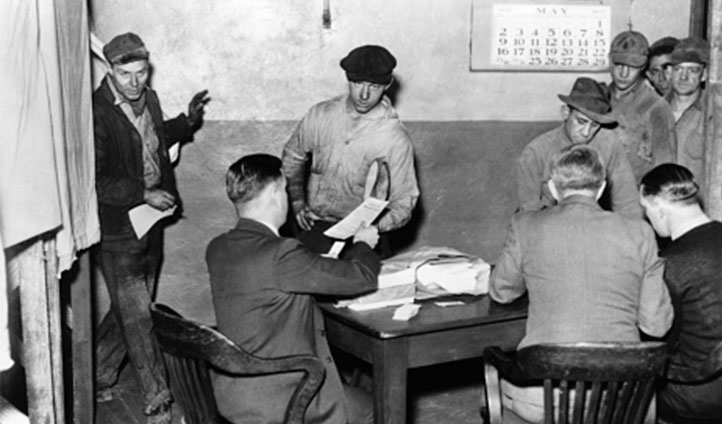 The case involved allegation of “unfair labor practices,” which are defined by the Act as restraint or coercion of employees in their rights to self-organization and to bargain collectively through representatives of their own choosing, and discrimination against them in regard to hire or tenure of employment for the purpose of encouraging or discouraging membership in any labor organization. The NLRB specifically alleged that Jones & Laughlin Steel Co. violated the Act by discriminating against employees who joined a union by terminating their employment. The NLRB ordered Jones & Laughlin Steel Co. to rehire the workers; however, the steel company refused. It argued that the NLRA was unconstitutional.

The Court held that the NLRA did not violate the Commerce Clause. “The relation to interstate commerce of the manufacturing enterprise involved in this case was such that a stoppage of its operations by industrial strife would have an immediate, direct and paralyzing effect upon interstate commerce,” Chief Justice Charles Evans Hughes wrote on behalf of the majority. “Therefore, Congress had constitutional authority, for the protection of interstate commerce, to safeguard the right of the employees in the manufacturing plant to self-organization and free choice of their representatives for collective bargaining.”

In reaching its decision, the Court addressed Congress’ power under the Commerce Clause.

According to the majority, “acts which directly burden or obstruct interstate or foreign commerce, or its free flow, are within the reach of the congressional power, and this includes acts, having that effect, which grow out of labor disputes.”

As Justice Chief Justice Hughes further explained: “Although activities may be intrastate in character when separately considered, if they have such a close and substantial relation to interstate commerce that their control is essential or appropriate to protect that commerce from burdens and obstructions, Congress cannot be denied the power to exercise that control.”