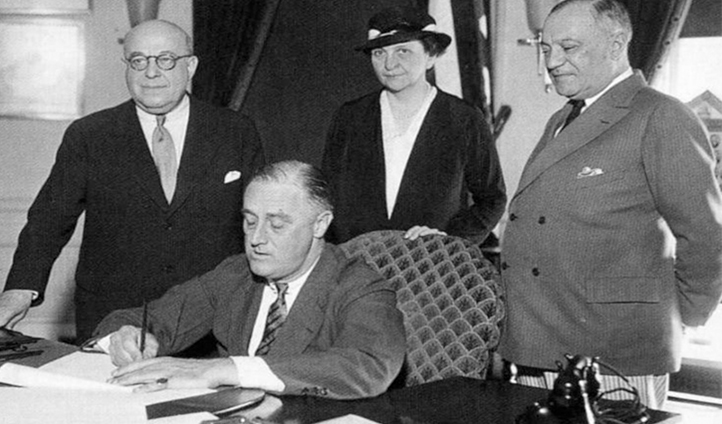 The National Labor Relations Act created a new national labor policy and is one of the most enduring aspects the New Deal. Often referred to as the “Wagner Act” in recognition of drafter New York Senator Robert F. Wagner, the law established the right of employees to organize, form labor unions, and collectively bargain with their employers.

Evolution of the Wagner Act

The invalidation of the National Industrial Recovery Act (NIRA) was a serious blow to organized labor. It also led to widespread labor strikes and several violent conflicts between workers and police. In response, the Senate passed the Wagner Act in May 1935, and it cleared the House one month later. President Roosevelt signed it into law on July 5, 1935.

Key Provisions of the NLRA

The Wagner Act sought to guarantee employees “the right to self-organization, to form, join, or assist labor organizations, to bargain collectively through representatives of their own choosing, and to engage in concerted activities for the purpose of collective bargaining or other mutual aid and protection.” It governed all employers engaged in interstate commerce, with the exception of airlines, railroads, agriculture, and government.

Section 7 established the general principle that employees have the right to join a trade union and engage in collective bargaining, stating:

Employees shall have the right to self-organization, to form, join, or assist labor organizations, to bargain collectively through representatives of their own choosing, and to engage in other concerted activities for the purpose of collective bargaining or other mutual aid or protection, and shall also have the right to refrain from any or all of such activities except to the extent that such right may be affected by an agreement requiring membership in a labor organization as a condition of employment as authorized in section 8(a)(3).

The Wagner Act also established a set of prohibited actions by employers, employees, and unions. Most notably, Section 8 made it illegal for employers “to interfere with, restrain, or coerce employees in the exercise of the rights guaranteed in section 7.” The regulation also made it an unfair labor practice “to dominate or interfere with the formation or administration of any labor organization or contribute financial or other support to it.”

The Wagner Act established National Labor Relations Board (NLRB) to decide labor disputes, oversee the process by which workers decide whether to be represented by a labor organization and enforce the law’s provisions. It specifically authorized the NLRB to investigate unfair labor practices and penalize employers for violations.

In 1937, the U.S. Supreme Court upheld the constitutionality of the NLRA in National Labor Relations Board v. Jones & Laughlin Steel Corp. It held that “Congress had the constitutional authority, for the protection of interstate commerce, to safeguard the right of the employees in the manufacturing plant to self-organization and free choice of their representatives for collective bargaining.”

Union membership skyrocketed in the wake of the Wagner Act, particularly among female workers. At the end of the 1930s, approximately 800,000 women belonged to unions, representing a threefold increase.